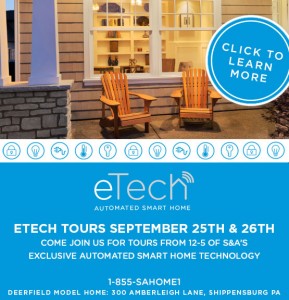 What exactly is an automated smart home?  As one of the only home builders to provide a comprehensive smart home package as a standard inclusion**, we understand that the definition of a smart home can vary widely from house to house.  At S&A Homes, our eTech Automated Smart Home package offers a robust set of inclusions that offer the perfect building foundation for those seeking to elevate their home to the next level.

That being said, it’s one thing to “talk” about what we include in our homes and something else to demonstrate all of this awesome technology. For those living in South Central Pennsylvania, they will have the opportunity to do just that this weekend at our fully outfitted Deerfield model home, located in Shippensburg, PA.  This Saturday & Sunday from 12-5, join us and immerse yourself in the most cutting edge technology that is being included in new homes today.  Here are some of the eTech features that are included in every home we build that will be on display this weekend: END_OF_DOCUMENT_TOKEN_TO_BE_REPLACED

Limited Opportunities Remain for Those Seeking a New Home Near Hagerstown, MD

Hagerstown, Maryland. It may not be the first city that comes to mind for DC or Baltimore commuters, but this gem of a town packs a pretty big punch for the area. Unlike its more expensive suburban counterparts, the city features some of the same amenities you find closer to DC without the expense.

Well known for being home to the popular Hagerstown Premium Outlets, many who aren’t from the region may not realize it is also a cultural hub for fans of the arts or museums. For example, you can catch a performance of the Maryland Symphony at the Maryland Theatre which boasts one of the most beautiful and ornate classic theatres on the eastern seaboard. Or perhaps enjoy the scenery at the Hagerstown City Park, ranked #1 as the most beautiful city park by EscapeHere.com. The kiddos won’t miss out either since the city boasts the local favorite, Discovery Station, a hands-on interactive children’s museum and even a train museum and aviation museum. END_OF_DOCUMENT_TOKEN_TO_BE_REPLACED